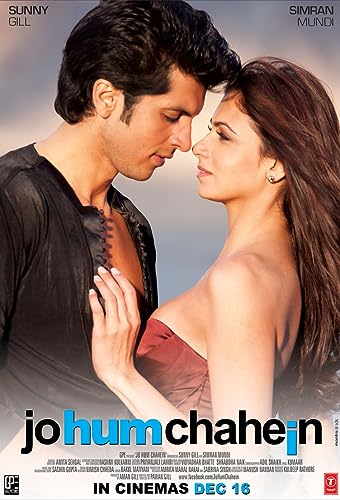 Movie: Jo Hum Chahein(2011)[2112978] This is a coming of age story of Rohan Bhatia and Neha Kapoor, two young, hip, effervescent individuals whose lives change forever once they meet and fall in love. Rohan is a brash, cocky, ambitious, 24 year old MBA graduate who wants instant success and he'll do anything to make that come true! Rohan moves to Mumbai to pursue a career as a stockbroker where he meets Neha, a no nonsense, strong headed girl who's come to Mumbai to follow her dreams, the dream of becoming a film actor. Neha is someone who believes in love, but hasn't given and guy a chance because no one measures up to her standards of Mr. Right. That's until Rohan comes along and her life changes completely. Both of them have different wants, desires and quests but they manage to come together and go on a journey that intertwines their personal and professional lives where they touch the peaks of love, loss, despair, longing, betrayal and redemption. Written byAnonymous