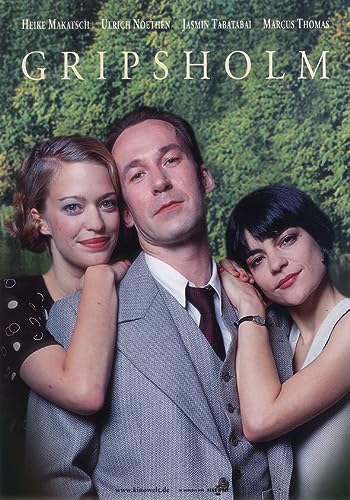 Movie: Gripsholm(2000)[0199000] Based on the Kurt Tucholsky's novel Schloss Gripsholm and on his real life story, this beautifully produced feature film plunges the audience into the pleasure-craving, decadent world of Berlin cabaret at the beginning of the 1930s. Kurt Tucholsky, who was an important Jewish German intellectual, give us Kurt, a German-Jewish publisher, ironic author and, thanks to his risqué chanson lyrics, a celebrated star of the cabaret. After writing inflammatory articles about the Nazis, in the summer of 1932, Kurt travels to the Swedish palace of Gripsholm with his girlfriend Lydia and their friends, the seductive vaudeville singer Billie and the passionate fly-boy Karlchen. Nothing will ever be the same again. Written byNational Center for Jewish Film

markus.st on 9 December 2000
The film goes beyond Tucholsky's light autobiographic Novel by picturing the process of Nazi takeover and its effect on the intellectual and artist community. Writer and journalist Kurt Tucholsky is trying to evade the growing political and legal pressure aimed against his pacifist activism by taking some vacation together with his girlfriend Lydia. Together they spend some happy days in Gripsholm Castle, Sweden. Although a visit by his old pal Karl who has turned into a Nazi admirer temporarily reminds him of the unpleasant changes that take place back home, he finds distraction in comfy country life, in caring for an unfortunate runaway child and erotic adventures together with Lydia and Billie, a Berlin variété singer. Ultimately his attempt to evade reality lead into exile and isolation. Although quite conventional and ultimately predictable in its making, the film succeeds in depicting the dilemma of German intellectuals in exile. A beautiful soundtrack and excellent acting are additional assets.

Agatha and the Curse of Ishtar